GET A FREE QUOTE

Bhutan shrouded behind the mystical aura and legends is the last Himalayan Kingdom. There are lot of places to visit in Bhutan. In Bhutan Holiday's 6Nights and 7Days Incredible Bhutan Tour Package get the zest of indigenous culture of Bhutan during your Bhutan Holidays. Experience the business town of Phuentsholing first. Then you will experience extraordinary journey of exploring the capital city of Thimpu, former capital Punakha, Punakha dzong and ancient town of Paro. During your journey you will witness mesmerising scenic beauty from Dochula pass. Get the flavour of indigenous culture and cuisine of Bhutan during your Bhutan Holidays.

We will take you to Thimphu, the capital city of Bhutan. Here we will visit the grandiose Trashichhoe Dzong, National Textile Museum, Memorial Chorten and witness the tallest statue of Sakyamuni Buddha above Kuensal Phodrang Nature Park. Later you will be transferred to Punakha en route Dochula pass. The most beautiful place in Bhutan is Punakha. In Punakha you will visit Punakha Dzong and Druk Wangyal Lhakhang. The regal town of Paro is best known for the Cliffside Monastery Taktsang also known as the Tiger's Nest. All these destinations and activities in our 6 Nights 7 Days Bhutan Holiday's Tour Package are carefully selected by the experts to let you get the best of Bhutan in 7 Days. 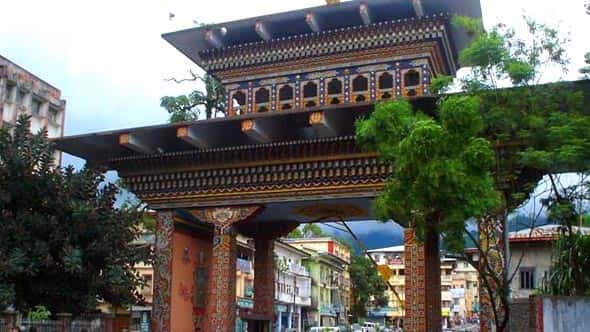 Bhutan Tour Package Special Tips - About Phuentsholing: Amo Chhu crocodile breeding centre was established in 1976. Initially it was started with only twelve crocodiles. Amo Chhu crocodile breeding is now helping in the rising of tourism of Phuentsholing. Here tourists will find two species of crocodile, Gharials and Muggers. Both these species are listed under the list of critically threatened species by IUCN. 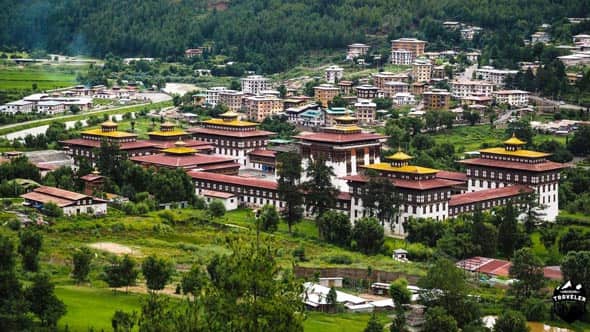 After an early morning breakfast, checkout from your hotel and start your 5-6 hrs drive to your hotel in Thimphu. The capital city Thimphu is the only city of Bhutan which showcases the impeccable blend of past and present in its astounding architecture. The road leading towards Thimphu are carved on the rugged terrain through daunting hill. These roads are known for the pictorial landscape of dense conifer trees and scenic valley. Have lunch on the way to Thimphu. Check into your hotel and freshen up. In the evening you are free to rest in your hotel or you can take a stroll in the market area of Thimphu to taste the local Bhutanese delicacies. Overnight stay at Thimphu.

Bhutan Tour Package Special Tips - About Thimphu: Thimphu was formerly known as Thimbu. Thimphu is situated on the bank of Thimphu Chhu. Later on this river will become Raidak after entering India. This city was established in 1955 and became capital of the land of the Thunder Dragon (Bhutan) in 1969 during the rule of 3rd Druk Gyalpo Jigme Dorji Wangchuck. 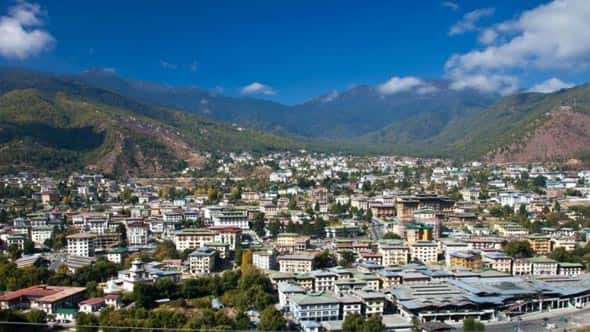 After breakfast, you will start your outing in Thimphu. The first place to visit is the Memorial Chorten built to memorialise 3rd Drukpa Gyalpo. Memorial Chorten is situated in the heart of Thimphu. You will find many devotees near the chorten. Enjoy the peaceful ambiance for some time. Now we will be going to Mothitang Takin Preserve. The preserve is the home of takin which is national animal of Bhutan. Morning hours are the best time to visit as takin comes near the fences to eat their food. This rare animal has hyped the interest of many animal lovers. Near takin Preserve there is the BBS Tower from where you will get a scenic view of Thimphu City. Our next stop is National Textile Museum. Here you may learn to wear Gho and Kera while finding out the inequality between royal dress and ordinary dress. After having our lunch we will drive to the famous Thimphu Dzong situated along the river banks of Wang Chhu. Thimphu Dzong is also known as Trashichhoe Dzong with its monumental architecture and ancient artefacts. After adorning the colourful Thangkhas and painting we will proceed towards Kuensal Phodrang Nature Park to witness the brilliant statue of Sakyamuni Buddha also known as Buddha Dordenma, the Buddha View Point has become the iconic landmark of Thimphu. After appreciating the view of Thimphu valley let us proceed to your hotel. Overnight stay at Thimphu.

Bhutan Tour Package Special Tips - About Takin: Takin is a rare animal. Takin's head mirrors with a mountain goat and body of a cow. Takin was announced national animal of Bhutan on 25thNovember 2005. The legend behind this is an interesting one. In 15th century a Tibetan saint Drukpa Kunley popularly recognized as "The Divine Madman" is credited in creating this mystical animal. The Divine Madman was not only a religious preachers but he was also a proficient tantric. As per the legend, few Bhutanese people requested Drukpa Kunley during one of his religious lecture to do a miracle before them. The Divine Madman agreed to do so provided he was fed for the lunch a whole cow and a whole goat. Once the lunch was served, he devoured both the animals leaving only the bones. It is said then The Divine Madman took the head of the goat and fixed it in the skeleton of cow while uttering some mantra and right before the eyes of the bystander the mystical animal Takin was created. Till date Takin resides the hill side of Bhutan. Due to this magical creation with high religious connotation, Takin has been adopted as the national animal of Bhutan. 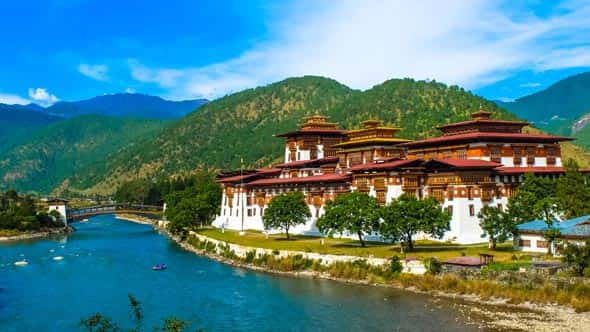 After breakfast checkout from the hotel and start your 4-5 hrs journey to your hotel in Punakha. Punakha is the first capital of Bhutan. Punakha is best known for its fertility temple of Chimi Lhakhang. This place is entitled as the most pictorial town of Bhutan. After covering 30 km stop at Dochula Pass to enjoy the panoramic view of Great Himalayas while being engulfed by the cool breezes. It is also the best way to start your journey towards Punakha. Have your lunch on the way to Punakha. Reach Punakha after covering approx 88 km and check into your hotel. After freshening up, you are free for the rest of the day to relax and enjoy the scenic beauty of Punakha. Overnight stay at Punakha.

Bhutan Tour Package Special Tips - About Dochula: At an elevation of 10,171 ft the 108 memorial chortens of Dochula Pass were built in the memory of the Bhutanese soldiers who were killed in the 2003 battle. 108 memorial chortens is also known as Druk Wangyal Chorten. This was built under the commandment of Her Majesty, the eldest Queen Mother Ashi Dorji Wangmo Wangchuck.

DAY 5: LOCAL SIGHTSEEING OF PUNAKHA AND TRANSFER TO PARO 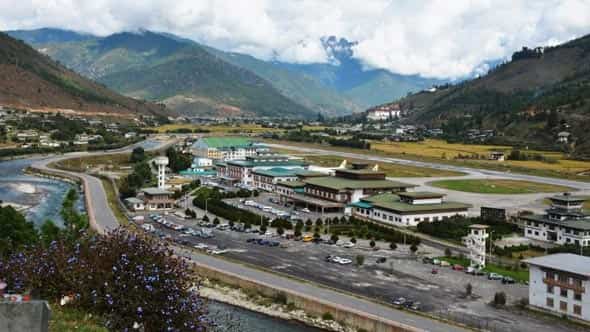 Have your breakfast early and then we will checkout from the hotel of Punakha. Our first destination is Punakha Dzong. Punakha situated at an altitude of 3937 ft is a historic town of Bhutan along the banks of Pho Chhu and Mo Chhu. You will be visiting Pungtang Dewa Chhenbi Phodrang commonly known as Punakha Dzong. Built in 1637-38 Punakha Dzong is also the 2nd oldest and 2nd largest Dzong in Bhutan. Overlooking the scenic gorge, Punakha Dzong with its grandiose structure has been a must visit places in Punakha Valley. Then we will be visiting Druk Wangyal Lhakhang. A temple known as the Druk Wangyal Lhakhang, with the backdrop of "pristine" forest of the snow covered Himalayan Mountains, was initiated and completed in June 2008. This was built as a memorial to celebrate 100 years of monarchy in Bhutan. After having your lunch you will proceed for Paro. You have to cover 127 km in almost 4 hours. Check in to your hotel at Paro and freshen up. You can either take rest or can stroll around to get acquainted with Paro. Overnight stay at Paro.

Bhutan Tour Package Special Tips - About Punakha Dzong: The hill atop which the Punakha Dzong is built resembles the trunk of an elephant and all the Kings of Bhutan were coroneted in Punakha Dzong. Punakha Dzong was founded by Ngawang Namgyal, the 1st Zabdrung Rinpoche. According to the Bhutanese Legend, Guru Padma Sambhaba had already foretold about the event where a person named Namgyal will arrive at a hill that looks like an elephant. Since the time of its establishment, Punakha Dzong has been damaged 6 times by fire, once by earthquake and once by flood. 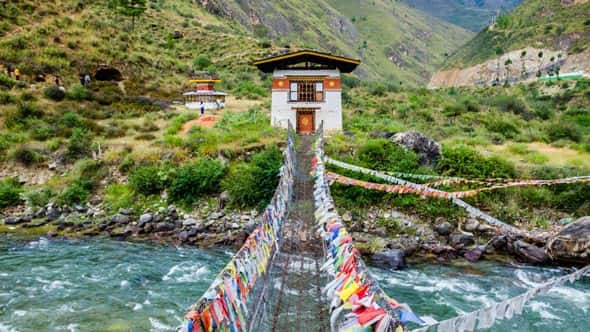 Complete your breakfast at the earliest and then you will start your Paro sightseeing. Paro is situated on the river banks of Mo Chhu and Pa Chhu. Paro is a scenically blessed town of Bhutan with many historical significant sites. Your first destination Taktsang Monastery is the most prominent attraction of Paro. It is a monastery built on the cliff. It takes two hour trek to reach Taktsang Monastery. You can either trek or ride on a pony. From Taktsang Monastery you will get the most outstanding view of Paro valley. Next we will take you to National Museum of Bhutan which is located in the Conch shaped building of Ta Dzong. Here, you can observe artefacts dating back to 2nd century and get an insight about the early Bhutanese era. After lunch we will drive you to Paro Dzong. Known as the Fortress on a Heap of Jewel, Paro Dzong is listed under the tentative sites of UNESCO. You can only walk in the courtyard of the Dzong since the main sanctum housing the Thondrol of Guru Rinpoche only opens during the annual Tsechu. After admiring the beauty of the purple jacaranda trees and shimmering water of Po Chhu and Mo Chhu return to your hotel. Overnight stay at Paro.

Bhutan Tour Package Special Tips - About Taktsang Monastery: Taktsang Palpung Monastery is also famously known as the Tiger’s nest. This is a prominent sacred Buddhist site of Bhutan. 'Taktsang' is spelled in Tibetan as 'Stag Tshang' that means a "Tiger's Nest" or a "Tiger's Lair" . According to a legend former wife of an emperor, known as Yeshe Tsogyal, willingly became a disciple of Guru Rinpoche (Padmasambahva) in Tibet. She transformed herself into a tigress to carry the Guru on her back from Tibet Taktsang in Bhutan. In one of the caves here, the Guru then performed meditation. As per this legend the place came to be known as the "Tiger's Nest". 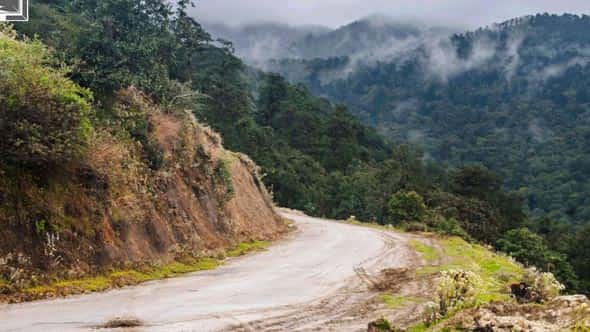 After an early morning breakfast, let us bid goodbye to Paro and proceed to Hasimara. It is an overall 6 hrs journey from Paro to Hasimara. Relish the beauty of the journey while bidding farewell to the mystical land of Bhutan. After covering the distance of 179 km you will reach Hasimara Railway Station and your 6 Nights and 7 Days Bhutan Holiday's Tour Package will come to an end.